Refractive surgery, through the use of very sophisticated laser equipment, so far widely tested over the years, allows reducing the main refractive defects, such as myopia, hyperopia and astigmatism, even when associated with each other.
The main types of surgery are those performed with excimer lasers and/or femtosecond lasers, but other types of surgery for implanting intraocular lenses are also available with or without the removal of the natural crystalline lens. So PRK, LASIK, FEMTOLASIK; LASIK EXTRA, PHAKIC IOLs and many other systems make these corrections possible. 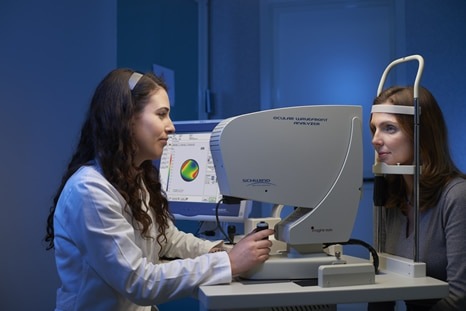 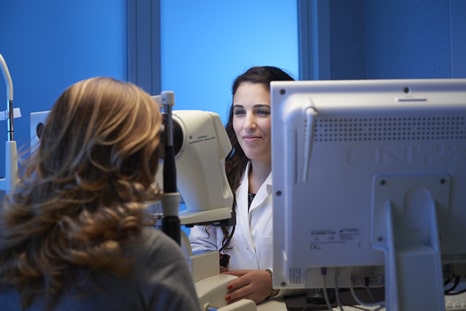 Refractive Surgery: PRK
PRK, i.e. photorefractive keratectomy, is a type of surgery that allows changing on a permanent basis the shape of the cornea, with the aim of reducing or removing myopia, hyperopia or astigmatism. This procedure is similar to that of LASIK surgery (LASer-assisted In situ Keratomileusis), since it involves the use of an excimer laser.

The LASIK technique (laser-assisted in situ keratomileusis)
Today LASIK accounts for more than 75% of the procedures worldwide; it is a mixed technique, which involves the mechanical creation of a flap of corneal tissue by means of a microkeratome or a femtosecond laser. This flap is lifted to expose the underlying layer of cornea, which is subsequently treated with excimer laser (which produces pulses of light in the ultraviolet region). At the end of surgery, the corneal flap is repositioned in its seat, where it heals spontaneously, during the healing process. This maximizes both postoperative comfort (it is painless) and the speed of visual recovery, which is very rapid. In addition, the scar will be formed in an area protected from the ultraviolet rays of sunlight, which is situated between the flap and the treated part. This ensures that this scar remains always perfectly transparent.

In cases where the cornea has a very thin initial thickness, a technique specially designed to harden the corneal structure can be added. This technique is called Corneal Cross-linking and was first introduced to treat corneal degenerations such as keratoconus. Now, however, having proved very reliable and safe, it is used as an additional technique to LASIK to perform the LASIK EXTRA procedure. In all, only a few minutes are required in comparison with the standard LASIK procedure, but what we get in return is a best final strength.

LASIK EXTRA
It consists in instilling drops of a particular substance during the LASIK procedure, subjecting it to special laser radiation for a few minutes. The entire procedure on both eyes does not exceed ten minutes in total.

PRK (photorefractive keratectomy)
PRK was the first procedure to use the excimer laser to treat errors of refraction, and still today it is a widely used approach. It produces a change in the anterior corneal surface, which is specially calculated to allow a better focus of the images on the retina. The final profile obtained changes, obviously, from defect to defect, being flatter in the correction of myopia or more curved in the correction of hyperopia. During photorefractive keratectomy (PRK), the laser removes by ablation (i.e. by vaporization) tiny fragments of tissue from the corneal stroma, located in the front part of the eye. Unlike what happens with the LASIK technique, here the surgeon does not create a flap of tissue to be then lifted up, but applies the laser directly on the front surface of the eye to achieve the desired effect. La PRK is more suitable for patients with thin corneas or particular corneal abnormalities, where it is preferable not to use a microkeratome or a femtosecond laser.

LASEK
Laser epithelial keratomileusis (LASEK) is a procedure similar to PRK, but it requires the use of alcohol to remove and displace the corneal epithelium. A laser is then used to modify the shape of the cornea. A few days later, the surface layer of alcoholised cells starts growing again naturally. This technique was applied during a sporadic and very short period, after which it was virtually abandoned. 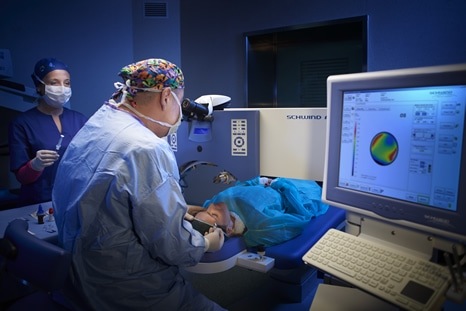 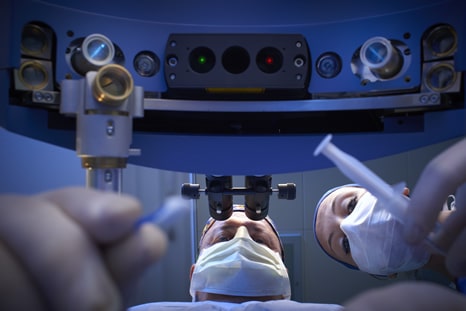 Before performing refractive surgery it is necessary to undergo a thorough review of the general and eye health. The front surface of the eye and its condition and shape are mapped using an instrument called a corneal topographer, while the corneal thickness is measured with a pachymeter. Today, we use a laser tool that performs both of these surveys with high precision, PENTACAM HR, a true reference standard for these assessments. Among other things, it also allows a comparative assessment over time, and is particularly useful to evaluate the postoperative recovery, as well as to assess any suspicious preoperative conditions.

During the three days preceding surgery, a preventive antibiotic therapy is prescribed, by instillation of antibiotic drops into both eyes, with the purpose of eliminating or break down as much as possible the possible bacterial load existing. Topical antibiotic helps prevent more certainly the chances of infection. On the day of surgery, on the operating table and under the laser device, while an anaesthetic numbs the corneal surface, a speculum is gently placed between the eyelids to prevent the patient from blinking, after which the patient is asked to stare at a reference light, namely a green flashing LED. This maximizes the centring of the laser treatment, which, however, is also ensured by a very important device called EYE TRACKER, which follows even the smallest and most rapid eye movements, ensuring that the laser radiation is always released in the correct spot.

Before ablation, the surgeon once used to remove a thin layer of the outer tissue that covers the cornea (corneal epithelium), but with the latest technology currently available to us this procedure is performed directly by the laser. After the surgical reshaping of the cornea, the aforementioned epithelium regenerates completely within 3-5 days and, in the meantime, the cornea is protected with a particular contact lens, which is removed only after the epithelium has completely healed.

To correct myopia, hyperopia and/or astigmatism, the surgeon uses an excimer laser, programmed according to calculations made after the preliminary eye examination. Laser surgery offers, therefore, the possibility of correcting the refractive error accurately, by sending light beams, which last only a few billionths of a second, in preset coordinates on the cornea. This technique also uses a monitoring system, which tracks the position of the patient’s eye from 60 to 4,000 times per second and allows us to actually follow the eye movements, redirecting the pulses with high precision (EYE TRACKER). As a matter of fact, most modern laser tools automatically centre the visual axis of the patient, suspending ablation if the eye moves excessively, and then resume it when the eye is back in place. This procedure takes about 5-10 minutes, but may vary depending on the complexity of the necessary correction. Most people do not perceive pain during PRK, although the patient being treated may feel a slight pressure around the eyes.

When the operation is over, the doctor may instil some eyedrops, to give the patient greater comfort and provide him with eye protection. Moreover, a special soft contact lens can be positioned to facilitate the initial healing phase, which should occur within the first 3-4 days after PRK. During this period, the patient may experience irritation, sensation of a foreign body in the eye, light sensitivity and, in some cases, pain. The healing process continues for months after surgery, but the discomfort tends to progressively decrease within a few days and the patient may experience a considerable improvement of his eyesight. PRK is normally performed on both eyes on the same day, but, when so required, it can be performed on one eye at a time. Activities requiring a good binocular vision may need to be suspended during the postoperative recovery between the operations and during periods of particularly prolonged healing. Prescriptions and medications. To facilitate the post-operative recovery, patients need to pay special attention to the detailed instructions of the doctor. The ophthalmologist customizes the therapeutic regimen based on the individual postoperative needs, but as a rule the prescribed treatment includes anti-inflammatory eyedrops and a topical antibiotic. Artificial tears may be needed to limit the effects of dry eye syndrome, up to one year after the procedure or in the long term. PRK is a procedure used less than the LASIK technique, but it is still applied whenever the latter is not the best choice.

Difference between LASIK and PRK

Both procedures use an excimer laser to reshape the cornea and correct the defects of refraction. During PRK, the laser is used to reshape the cornea by acting directly on its surface, while in the LASIK technique it is applied after the creation and lifting of a flap of corneal tissue. LASIK surgery is the most popular procedure, generally used for medium and high visual defects, but also valid for mild forms; however, it is important to follow the guidance and judgment of the surgeon to determine the surgical procedure that potentially allows to achieve the better results.

The following table shows the main differences between PRK and LASIK eye surgery:

The purpose of refractive surgery is to minimize or eliminate the patient’s need to wear glasses or contact lenses. PRK and LASIK allow obtaining similar results. Most people can reach 20/20 after the photorefractive keratectomy procedure (PRK), and almost all patients see their visual acuity improve. However, the predictability of the correction of the visual defect is not an absolute guarantee: the improvement that can be achieved after healing is not quantifiable, particularly for cases of severe myopia. The outcome of the PKR depends on how well the eyes heal. After the procedure, some patients may still need to use glasses or contact lenses, but the prescription to correct the residual refractive error can be significantly lower.